The terms that must typically be assigned a numerical scheme in fvSchemes range from derivatives, e.g. gradient

, to interpolations of values from one set of points to another. The aim in OpenFOAM is to offer an unrestricted choice to the user, starting with the choice of discretisation practice which is generally standard Gaussian finite volume integration. Gaussian integration is based on summing values on cell faces, which must be interpolated from cell centres. The user has a wide range of options for interpolation scheme, with certain schemes being specifically designed for particular derivative terms, especially the advection divergence

The set of terms, for which numerical schemes must be specified, are subdivided within the fvSchemes dictionary into the categories below.

Each keyword in represents the name of a sub-dictionary which contains terms of a particular type, e.g.gradSchemes contains all the gradient derivative terms such as grad(p) (which represents

). Further examples can be seen in the extract from an fvSchemes dictionary below:

The example shows that the fvSchemes dictionary contains 6 …Schemes subdictionaries containing keyword entries for each term specified within including: a default entry; other entries whose names correspond to a word identifier for the particular term specified, e.g.grad(p) for

If a default scheme is specified in a particular …Schemes sub-dictionary, it is assigned to all of the terms to which the sub-dictionary refers, e.g. specifying a default in gradSchemes sets the scheme for all gradient terms in the application, e.g.

. When a default is specified, it is not necessary to specify each specific term itself in that sub-dictionary, i.e. the entries for grad(p), grad(U) in this example. However, if any of these terms are included, the specified scheme overrides the default scheme for that term.

Alternatively the user can specify that no default scheme by the none entry, as in the divSchemes in the example above. In this instance the user is obliged to specify all terms in that sub-dictionary individually. Setting default to none may appear superfluous since default can be overridden. However, specifying none forces the user to specify all terms individually which can be useful to remind the user which terms are actually present in the application.

OpenFOAM includes a vast number of discretisation schemes, from which only a few are typically recommended for real-world, engineering applications. The user can get help with scheme selection by interrogating the tutorial cases for example scheme settings. They should look at the schemes used in relevant cases, e.g. for running a large-eddy simulation (LES), look at schemes used in tutorials running LES. Additionally, foamSearch provides a useful tool to get a quick list of schemes used in all the tutorials. For example, to print all the default entries for ddtSchemes for cases in the $FOAM_TUTORIALS directory, the user can type:

) terms are specified in the ddtSchemes sub-dictionary. The discretisation schemes for each term can be selected from those listed below.

Solvers are generally configured to simulate either transient or steady-state. Changing the time scheme from one which is steady-state to transient, or visa versa, does not affect the fundamental nature of the solver and so fails to achieve its purpose, yielding a nonsensical solution.

) terms are specified in the d2dt2Schemes sub-dictionary. Only the Euler scheme is available for d2dt2Schemes.

The gradSchemes sub-dictionary contains gradient terms. The default discretisation scheme that is primarily used for gradient terms is:


default         Gauss linear;
The Gauss entry specifies the standard finite volume discretisation of Gaussian integration which requires the interpolation of values from cell centres to face centres. The interpolation scheme is then given by the linear entry, meaning linear interpolation or central differencing.

In some tutorials cases, particular involving poorer quality meshes, the discretisation of specific gradient terms is overridden to improve boundedness and stability. The terms that are overridden in those cases are the velocity gradient

grad(k)         cellLimited Gauss linear 1;
grad(epsilon)   cellLimited Gauss linear 1;
They use the cellLimited scheme which limits the gradient such that when cell values are extrapolated to faces using the calculated gradient, the face values do not fall outside the bounds of values in surrounding cells. A limiting coefficient is specified after the underlying scheme for which 1 guarantees boundedness and 0 applies no limiting; 1 is invariably used.

Other schemes that are rarely used are as follows.

provides the advective flux, and other terms, that are often diffusive in nature, e.g.

The fact that terms that are fundamentally different reside in one sub-dictionary means that the default scheme in generally set to none in divSchemes. The non-advective terms then generally use the Gauss integration with linear interpolation, e.g.


foamSearch $FOAM_TUTORIALS fvSchemes "divSchemes.div(phi,U)"
The schemes are all based on Gauss integration, using the flux phi and the advected field being interpolated to the cell faces by one of a selection of schemes, e.g. linear, linearUpwind, etc. There is a bounded variant of the discretisation, discussed later.

Ignoring ‘V’-schemes (with keywords ending “V”), and rarely-used schemes such as Gauss cubic and vanLeerV, the interpolation schemes used in the tutorials are as follows.

Example syntax for these schemes is as follows.

‘V’-schemes are specialised versions of schemes designed for vector fields. They differ from conventional schemes by calculating a single limiter which is applied to all components of the vectors, rather than calculating separate limiters for each component of the vector. The ‘V’-schemes’ single limiter is calculated based on the direction of most rapidly changing gradient, resulting in the strongest limiter being calculated which is most stable but arguably less accurate. Example syntax is as follows.

For numerical solution of incompressible flows,

at convergence, at which point the third term on the right hand side is zero. Before convergence is reached, however,

and in some circumstances, particularly steady-state simulations, it is better to include the third term within a numerical solution because it helps maintain boundedness of the solution variable and promotes better convergence. The bounded variant of the Gauss scheme provides this, automatically including the discretisation of the third-term with the advection term. Example syntax is as follows, as seen in fvSchemes files for steady-state cases, e.g. for the simpleFoam tutorials

The schemes used for advection of scalar fields are similar to those for advection of velocity, although in general there is greater emphasis placed on boundedness than accuracy when selecting the schemes. For example, a search for schemes for advection of internal energy (e) reveals the following.

There are specialised versions of the limited schemes for scalar fields that are commonly bounded between 0 and 1, e.g. the laminar flame speed regress variable

. A search for the discretisation used for advection in the laminar flame transport equation yields:


div(phiSt,b)    Gauss limitedLinear01 1;
The underlying scheme is limitedLinear, specialised for stronger bounding between 0 and 1 by adding 01 to the name of the scheme.

The multivariateSelection mechanism also exists for grouping multiple equation terms together, and applying the same limiters on all terms, using the strongest limiter calculated for all terms. A good example of this is in a set of mass transport equations for fluid species, where it is good practice to apply the same discretisation to all equations for consistency. The example below comes from the smallPoolFire3D tutorial in $FOAM_TUTORIALS/combustion/fireFoam/les, in which the equation for enthalpy

is included with the specie mass transport equations in the calculation of a single limiter.

It is worth explaining the snGradSchemes sub-dictionary that contains surface normal gradient terms, before discussion of laplacianSchemes, because they are required to evaluate a Laplacian term using Gaussian integration. A surface normal gradient is evaluated at a cell face; it is the component, normal to the face, of the gradient of values at the centres of the 2 cells that the face connects.

A search for the default scheme for snGradSchemes reveals the following entries.

The basis of the gradient calculation at a face is to subtract the value at the cell centre on one side of the face from the value in the centre on the other side and divide by the distance. The calculation is second-order accurate for the gradient normal to the face if the vector connecting the cell centres is orthogonal to the face, i.e. they are at right-angles. This is the orthogonal scheme.

Orthogonality requires a regular mesh, typically aligned with the Catersian co-ordinate system, which does not normally occur in meshes for real world, engineering geometries. Therefore, to maintain second-order accuracy, an explicit non-orthogonal correction can be added to the orthogonal component, known as the corrected scheme. The correction increases in size as the non-orthonality, the angle

between the cell-cell vector and face normal vector, increases.

, the explicit correction can be so large to cause a solution to go unstable. The solution can be stabilised by applying the limited scheme to the correction which requires a coefficient

Generally the uncorrected and orthogonal schemes are only recommended for meshes with very low non-orthogonality (e.g. maximum 5

). The corrected scheme is generally recommended, but for maximum non-orthogonality above 70

, limited may be required. At non-orthogonality above 80

, convergence is generally hard to achieve.

, the diffusion term in the momentum equations, which corresponds to the keyword laplacian(nu,U) in laplacianSchemes. The Gauss scheme is the only choice of discretisation and requires a selection of both an interpolation scheme for the diffusion coefficient, i.e.

in our example, and a surface normal gradient scheme, i.e.

. To summarise, the entries required are:


Gauss <interpolationScheme> <snGradScheme>
The user can search for the default scheme for laplacianSchemes in all the cases in the $FOAM_TUTORIALS directory. 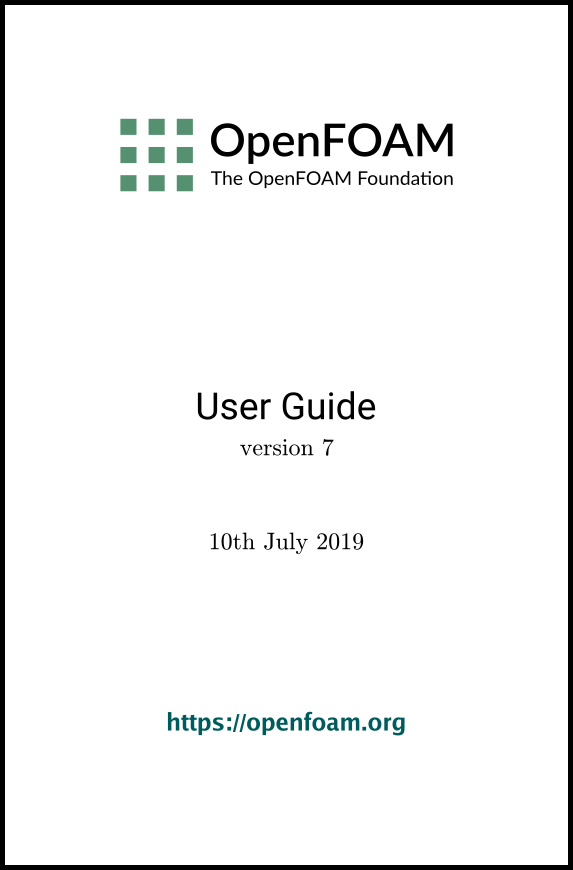