Both approaches have advantages. Conventional post-processing allows the user to choose how to analyse data after the results are obtained. Run-time processing offers greater flexibility because it has access to all the data in the database of the run at all times, rather than just the data written during the simulation. It also allows the user to monitor processed data during a simulation and provides a greater level of convenience because the processed results can be available immediately to the user when the simulation ends.

All modes of post-processing access the same functionality implemented in OpenFOAM in the function object framework. Function objects can be listed by running a solver with the -listFunctionObjects option, e.g.


simpleFoam -listFunctionObjects
The list represents the underlying post-processing functionality. Almost all the functionality is packaged into a set of configured tools that are conveniently integrated within the post-processing CLI. Those tools are located in $FOAM_ETC/caseDicts/postProcessing and are listed by running postProcess with the -list option.

singleGraph
Writes graph data for specified fields along a line, specified by start and end points.

residuals
For specified fields, writes out the initial residuals for the first solution of each time step; for non-scalar fields (e.g. vectors), writes the largest of the residuals for each component (e.g. x, y, z).
time
Writes run time, CPU time and clock time and optionally the CPU and clock times per time step.

icoUncoupledKinematicCloud
Tracks a cloud of parcels driven by the flow of the continuous phase.
scalarTransport
Solves a transport equation for a scalar field.

When a user wishes to process data during a simulation, they need to configure the case accordingly. The configuration process is as follows, using an example of monitoring flow rate at an outlet patch named outlet.

Firstly, the user should include the flowRatePatch function in functions sub-dictionary in the case controlDict file, using the #includeFunc directive.


functions
{
#includeFunc  flowRatePatch
... other function objects here ...
}
That will include the functionality in the flowRatePatch configuration file, located in the directory hierarchy beginning with $FOAM_ETC/caseDicts/postProcessing.

The configuration of flowRatePatch requires the name of the patch to be supplied. Option 1 for doing this is that the user copies the flowRatePatch file into their case system directory. The foamGet script copies the file conveniently, e.g.


foamGet flowRatePatch
The patch name can be edited in the copied file to be outlet. When the solver is run, it will pick up an included function in the local case system directory, in precedence over $FOAM_ETC/caseDicts/postProcessing. The flow rate through the patch will be calculated and written out into a file within a directory named postProcessing.

Option 2 for specifying the patch name is to provide the name as an argument to the flowRatePatch in the #includeFunc directive, using the syntax keyword=entry.

In the case where the keyword is field or fields, only the entry is needed when specifying an argument to a function. For example, if the user wanted to calculate and write out the magnitude of velocity into time directories during a simulation they could simply add the following to the functions sub-dictionary in controlDict.


functions
{
#includeFunc  mag(U)
... other function objects here ...
}
This works because the function’s argument U is represented by the keyword field, see $FOAM_ETC/caseDicts/postProcessing/fields/mag.

Some functions require the setting of many parameters, e.g. forces, forceCoeffs, surfaces, etc. For those functions, it is more reliable and convenient to copy and configure the function using option 1 (above) rather than through arguments.

The user can execute post-processing functions after the simulation is complete using the postProcess utility. Let us illustrate the use of postProcess using the pitzDaily case from the tutorials directory. The case can be copied, e.g. into the user’s run directory; the user can then go into the case directory, generate the mesh with blockMesh and then run simpleFoam

postProcess -help
Simple functions like mag can be executed using the -func option; text on the command line generally needs to be quoted ("…") if it contains punctuation characters.

postProcess -func "mag(U)"
This operation calculates and writes the field of magnitude of velocity into a file named mag(U) in each time directory. Similarly, the flowRatePatch example can be executed using postProcess.

for incompressible flow with kinematic pressure,

. The function is available, named totalPressureIncompressible, which the user could attempt first to run as follows.

--> FOAM Warning : functionObject pressure: Cannot find required field p
The error message is telling the user that the pressure field p is not loaded; the same is true of the velocity field U. For the function to work, both fields can be loaded as comma separated arguments.

postProcess -func "totalPressureIncompressible(p,U)"
Alternatively the user can load a space separated list of fields using the -fields option, which the function can access.

postProcess -fields "(p U)" -func totalPressureIncompressible
Both options work effectively because the pressure and velocity data is available directly from the files, p and U.

--> FOAM FATAL ERROR:
Unable to find turbulence model in the database
The message is telling us that the postProcess utility has not constructed the necessary models that the solver, simpleFoam, used when running the simulation, i.e. a turbulence model. This is a situation where we need to post-process (as opposed to run-time process) using the solver with the -postProcess option so that the modelling will be available that the post-processing function needs. Help for this operation can be printed with the following command.

simpleFoam -postProcess -help
It can be seen that the options for a solver with -postProcess are the same as when running postProcess utility. This means that the -func option can be used to execute the wallShearStress function effectively.

simpleFoam -postProcess -func wallShearStress
Note that no fields need to be supplied, either by function arguments ”(p,U)” or using ”-fields (p U)”, because simpleFoam itself constructs and stores the required fields. Functions can also be selected by the #includeFunc directive in functions in the controlDict file, instead of the -func option.
OpenFOAM v6 User Guide - 6.2 Post-processing command line interface (CLI) 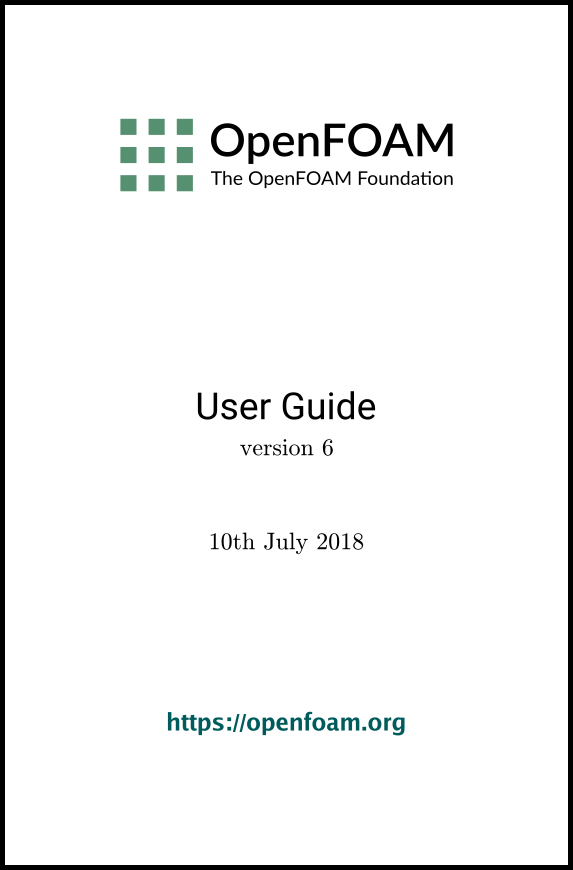